God mode is a third person shooter that focuses less on story and more on simple fast-paced action, you take control of a ‘distant descendant of the Gods’ that has been banished to hell by an ancient curse, forced to battle though hordes of demonic creatures in an attempt to escape. The game puts no emphasis on narrative, so if you’re looking for a deep story to get hooked into, this is not the game for you. God Mode is narrated completely your spirit guide, an annoying and sarcastic voice that constantly pokes fun at you as well as announcing every event that takes place in the game, most people I ask would say that this voice is irritating, but i found him to be quite funny…

God mode is built around a similar premise to that of the horde modes often found in popular shooters such as Halo or Gears of War. There are waves of enemies for you to fight with your wide array of weapons, allowing you to dismember and incinerate all manner of evil creatures, from big and intimidating Minotaur’s to the tiny exploding baby monsters. Each monster in the game is very unique and very well designed, even down to their smallest features; you can really see that a lot of effort was put into making the monsters of hell seem truly hellish. The game comes with a bestiary section of the main menus, in which you can look at all creature character models and read about their ability’s. 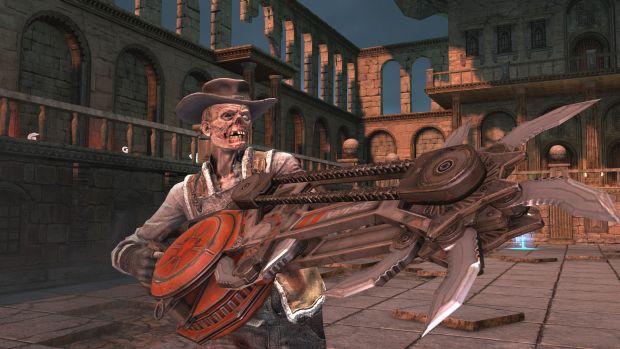 In God Mode you gain xp and gold upon completion of a map, the xp adds to your overall level, and with each level you unlock more weapons and vanity items to buy with the gold, the variety is not too big, but there is enough to keep you interested in levelling up more. The items include various hats, glasses, tops and pants, all with their own different demonic styles.

There are 5 different maps to play through in God Mode; these are all very well designed to give you no place to hide, meaning you won’t even have time to catch your breath, at least not until you finish the wave, this is fun but can also be a little overwhelming at times. Another great thing about the maps in this game is that they are constantly moving and changing around you as you kill to match the fast pace of the game. God Mode also does a brilliant job of scaling their vision of hell; some of the background actions reach almost epic proportions, as giant flaming Minotaur’s preform manual labour in the deep lava pools of hell, while giant battering rams destroy entire towers to make way for you and your team to move onto the next part of map. 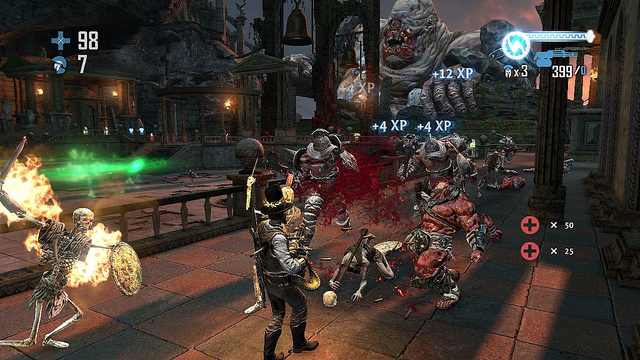 Before setting out into hell you can turn on your Oaths, Oaths are options that have negative effects such as making you deal less damage or giving you less heath, when turned on they also give you bonus xp and gold upon successfully reaching the end of a stage. Oaths are also good for players wanting a harder challenge, other than just swapping the difficulty settings. The difficulty settings are a simple Bronze, Silver and Gold system, with Bronze being the easiest and Gold being the hardest (obviously).

With each stage of a map there is a test a faith, a test of faith is a random event that will effect the stage in some way for the duration of a battle, this can be a number of things, such as raining fireballs that damage you, making the enemy’s much larger is size and power, or to even giving brief periods of invincibility to each player at random. There are far too many tests of faith to list, but all are a nice addition to the game as they give new challenges, making every match seem fresh, and also making for some silly cheap fun.

If you are planning on playing God Mode then you must realise that it is a dominantly multiplayer game, there is an option to play alone, however it may not be worth your time. The most fun you will get out of God mode will be while playing with your friends, as the game has very good sense of humour that is much more entertaining when shared with friends, the game is also a challenging co-operative experience, and was designed to be played with others.

Overall God mode isn’t the best game on the market today, but at its cheap price point of $9.99 (£6.99), that is to be expected, what it is though is a great game for you and your friends to play together when you have nothing better to do. The game is full of fast paced action that may be a bit much at times, but overall is quite exciting, so if you’re looking for some inexpensive cooperative fun, why not give it a try?

← Spec Ops: The Line – Review
More Layoffs at EA Due to ‘Hard but Essential Changes’ →